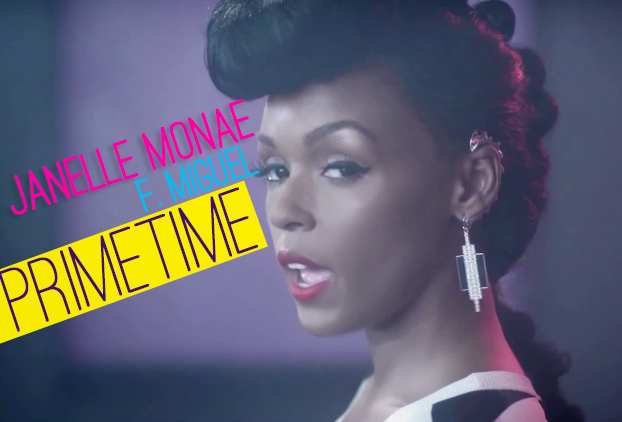 Janelle Monae has released the official visual for one of the best songs off her new album, The Electric Lady. Primetime, featuring Miguel, is a smooth r&b love song that everyone has on constant repeat. In the new video for Primetime, Janelle, while staying true to her black/white uniform, is stepping up the feminine class and rocking hair that is sure to inspire a hundred and one natural hair tutorials. We love it all.

PrimeTime is a love story based on the early adventures of Cindi Mayweather (Janelle Monáe) and her first love Joey Vice (Miguel.) The Emotion Picture gives a glimpse at Cindi’s humble beginnings as a “cyber-server” at the Electric Sheep nightclub, a syn bar serving high-class “show droids” to the rich and lonely in a dangerous section of Metropolis known as Slop City. Incidentally, the innovative cybersoul music played at the club directly impacted Cindi, and she began singing and performing her own innovative compositions a short time after quitting this assignment. In addition, Cindi became determined to change the public perception of what an electric lady could be, dream and aspire to after working in the dismal conditions at the club.

Catch the music video after the jump.