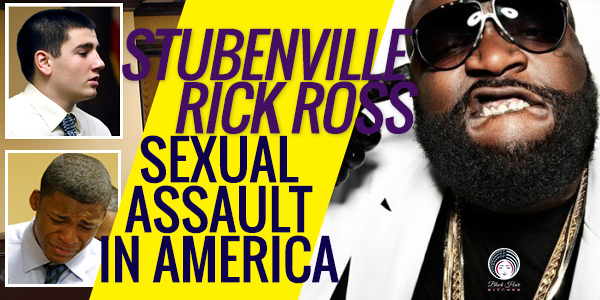 The Nation’s eyes turned to Steubenville, Ohio as we learned about the rape and subsequent cyber bullying of a sixteen year-old West Virginian girl. There has been quite a bit of discussion about the attack, the attackers, and the culture that allows this kind of crime to be committed. However, just as the dust began to settle following the verdict and the young woman finally began her healing process rapper Rick Ross released a new song, “U.O.E.N.O.” in which he describes raping an unconscious woman. Ross states, “Put molly all in her champagne / She ain’t even know it / I took her home and I enjoyed that / She ain’t even know it.” Even more disturbing than Ross’ disgusting lyric is his “apology.” Ross addressed the controversy Thursday morning on a New Orleans radio station saying,

“I want to make sure this is clear, that woman is the most precious gift known to man, you understand? There was a misunderstanding with a lyric, a misinterpretation. The term rape wasn’t used. I would never use the term rape in my records. As far as my camp, hip-hop don’t condone that, the streets don’t condone that, nobody condones that. So I just wanted to reach out to all the queens that’s on my timeline, all the sexy ladies, the beautiful ladies that had been reaching out to me with the misunderstanding. We don’t condone rape and I’m not with that.” [Source]

Pause. Ross wants us all to know that 1.) Women are man’s greatest gifts (read possessions) 2.) He didn’t say rape (even though he clearly described it) so it’s not rape  and 3.) It’s a misunderstanding! He may be a misogynist but a rapist? He’s not with that! There’s so much wrong with his apology but we’re just going to set that aside for now. There’s a bigger issue at hand; the Steubenville case and Rick Ross have taught America what teenagers and college students across the nation have slowly been coming to realize: we don’t know what rape is. We have this idea that rape only happens in dark alleys, that rape is only committed by strangers, and that if you’re a nice guy (and especially if you’re a star athlete) you can’t be a rapist. This couldn’t be further from the truth. What Ma’lik Richmond, Trent Mays, and Rick Ross failed to understand is that they have no right to anyone’s body but their own. Taking advantage of anyone, male or female, through force or by providing them with drugs or alcohol is rape. Period. I feel for Richmond and Mays, I really do. It’s obvious that they didn’t realize that what they did was rape, partly because people like Rick Ross promote it as cool and completely acceptable. That being said, they raped a young girl and they must be punished. They may have to serve one and two years respectively but that poor girl will have to live with what they did to her for the rest of her life. Trust me, I know what that feels like.

So let’s have a conscious-raising session, in your circles make sure all your friends know exactly what rape is.  For all you parents, make sure your children know what rape is. And for all you sexually active folk remember, consent is sexy.