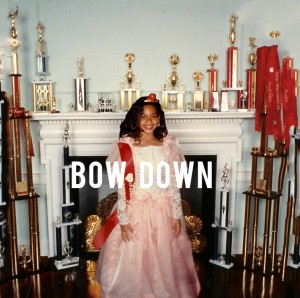 I try not to associate myself with the ‘BeyHive’ as they don’t represent how I operate and I recently had an incident with a fan on her Instagram page which convinced me that they’re mostly crazy little girls and boys with issues, but understand this – I am the ultimate Beyonce fan. I did by braids like her in the Noughties, I know the words to every single song of hers I like (a lot!), during playtime, if we were pretending to be Destiny’s Child, woe betide anyone who dared to want to be Beyonce – I did it all. I just don’t call myself a ‘Stan’ simply because of the demoralising behaviour the so called ‘BeyHive’ display. Unfortunately, I am unimpressed with this latest track as it fuels their crazy fires.

I don’t know if you guys can remember the Beyonce of years ago, but I remember she seemed very humble, and she only used to thank God for her talents and achievements. Now, she’s feisty and sexy. Okay great.  She doesn’t want us to forget she’s ‘grown’ now, and she ‘doesn’t have to please anyone’ (see her recent Vogue and GQ interviews), brilliant.  I actually agreed to an extent. She’s maturer now, she can definitely be sexy, she can definitely demand respect from her peers and that’s why I loved the album ‘4’ so much. It was unlike anything I’d ever heard, she had put all her feelings, her love for her husband, her joy at her success, everything into this album and she made me feel like I could be just as successful. It was full of positivity.

When I heard she was calling herself ‘King B’ I was a little puzzled. I’m all for female empowerment and I would refer to myself as a feminist, but I didn’t really, and I still don’t get that. I thought female empowerment was all about women having the right to choose how things should go in their lives, and not being dominated by men. I didn’t think it was an avenue for us to take men’s places in the world or chance for us to say that we are in charge. Why can’t we both be in charge? But hey that’s another story, and  I thought “Okay ma, you do your thing.” There is a fine line between confidence and arrogance however, and Bey was toeing that line a little but it’s allowed, she’s human after all. With this latest song, she has not only crossed the line, she is galloping off into the sunset. She seems cocky, arrogant and very different to how she recently portrayed herself in her Life Is But A Dream documentary.

I’m sure we all like to think we are ladies, I thought Bey was a lady too. With lyrics such as these, I don’t really know what to think now:

I understand what she is trying to say in this song, but I think she should have delivered her message in a more consistent manner. I thought she had moved beyond this. I would expect these sort of lyrics from a lesser artist, in fact, I’d expect these sort of lyrics from a male rap artist. All she needs to do in the video is have a load of big booty h**s and her pants sagging, and the picture will be complete. I’m not disappointed because she’s a mother now, or because of her age, I couldn’t care less if she wants to tell everyone in the game she’s better than them. Just have some class with what you do, have some finesse. I really don’t see the Obamas allowing their daughters to download this song, I had to turn it off quickly because I didn’t want my mother to hear the bad language. A lot of female artists say they had no intention of being role models, they don’t ask little kids to copy them, but ask those same artists who influenced them to be what they are today and they will mention women who uplift and inspire with their music.

Beyonce sounds like a bully in this track, which is sad because she is criticised in everything she does. It can be demoralising, I know this and I haven’t even experienced the level of criticism she has experienced. I thought she was  above all this, all the petty twitter comments that the likes of Keyshia Cola and Keri Hilson seem to be embroiled in. I always used to think that if they spent more time working on making good unique music than expressing their ‘opinions’ on twitter, they probably wouldn’t need have time to comment. Now, they are all as bad as each other in my eyes. Beyonce has shown us she is human, yes, but it looks to me like she spent her precious time making a diss track for people who are not even competing with her.

I say this a sad day for her fans because I honestly think true fans will be just as disappointed as I am. I don’t idolise her, she’s not ‘Beysus’, she is a normal human being who makes mistakes and has made on with this track. Sadly we all know Stans won’t see it that way though, they’ll attack you like the keyboard warriors they are, and call you ugly or a hater or tell you to bow down because that sort of behaviour has now been endorsed by Beyonce herself.

Have you heard the song? Tell me what you think.